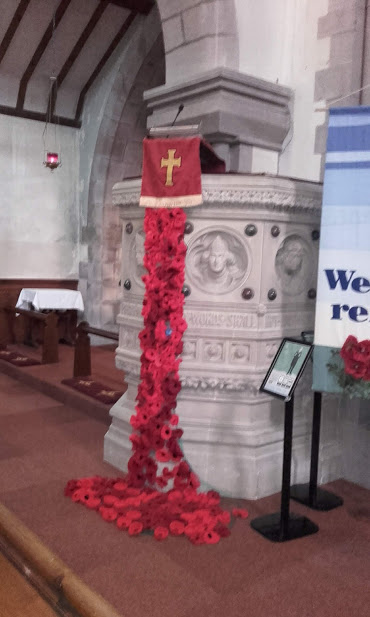 Hundreds commemorate the centenary of the 1918 Armistice.

The 100th Anniversary of the 1918 Armistice was commemorated in a moving and dignified manner in Stonehaven on Sunday.  The British Legion organised a very well attended Parade in the Market Square.  Led by George Craig, Parade Commander, they marched to St James’ Church.  The head of the Parade included the Queen’s representative, the Vice Lord Lieutenant of Kincardineshire, Dr Andrew Orr, DL.

In St James’, all the churches in the town contributed to the service, with readings and prayers.  The church was packed, with standing room only, for the service, with upwards of 450 people attending.  The service was led by Rt Revd Andrew Swift, Bishop of Brechin, who also preached the sermon, reminding the congregation of the continuing need to work and seek the faith for peace.  The two-minute silence took place at 11 o’clock, exactly one hundred years to the minute that the Armistice was declared.  It was followed by Iain McFadden playing ‘Flowers of the Forest’ on a set of bagpipes that belonged to Pipe Major George McGregor, who fought and ‘went over the top’ in World War I, and who founded the Newtonhill Pipe Band in 1905.  George survived the war, but his son, also called George, did not.

The most poignant moment came when six cadets, two each from the Sea, Air and Army Cadet units in the town read, with great dignity, the 207 names of those from Stonehaven who gave their lives in the two world wars.  They were accompanied by the steady tolling of the newly installed bell of the church.

The congregation was in full voice for the hymns ranging from ‘O God our help in ages past’ to ‘O valiant hearts’, ably led by Peter Parfitt on the historic St James’ Wadsworth organ, which was built in the days when the congregation numbered 500.  The service concluded with three verses of the National Anthem, during which the colours of the British Legion were dipped in salute.  The retiring collection raised £1,290 for Poppy Scotland.

After the service, the Parade marched back to the Market Square, passing the saluting base outside the Town Hall.  They then climbed up the long path to Black Hill war memorial.  There, again led by the Vice Lord Lieutenant, and under a bright and brisk November sky, a large contingent of uniformed groups, politicians and church representatives laid wreaths on the memorial and held a short service.

Shortly afterwards, St James’ joined the nationwide bell-ringing to mark the change from the remembrance of the morning to celebration of the peace of the afternoon.  With a team of bell-ringers, the bell rang out for a full half an hour.