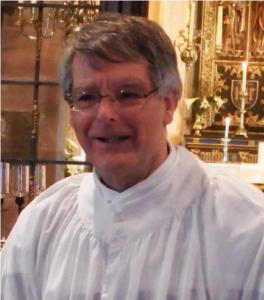 Jonathan Eades died peacefully aged 67 on 28 December 2018 in Scarborough where he retired in 2016. Cruelly, in addition to the degenerative ataxia from which he was already suffering, an aggressive terminal cancer was diagnosed which he faced with great courage.
Educated at Leighton Park School, a Quaker foundation in Reading, Jonathan graduated from Dundee and Edinburgh Universities, training for the ministry at Edinburgh Theological College. He was ordained by Bishop Ted Luscombe in St Paul’s Cathedral Dundee in 1977. For eleven years he served as Cathedral Chaplain and Dundee University Chaplain in the Diocese of Brechin.

A son of Staffordshire and the Diocese of Lichfield, in 1988 Jonathan became Team Vicar and later Rural Dean of Leek. He was subsequently Vicar of Wolstanton 1996-08 and Rector of Ashley 2008-16. In 2008 he was made a Prebendary of Lichfield Cathedral.
Jonathan will be fondly remembered as a faithful priest and fine person: diligent and effective, kind, intelligent and sociable, and, as a bishop once remarked, ‘the most self-deprecating priest’ he had ever known. Jonathan valued good theology that was accessible to all kinds of people. Academics and students recall with gratitude his significant influence in their lives, while numerous parishioners over the years are grateful for his prayerful and wise pastoral leadership.

Jonathan would smile at dying on Holy Innocents Day – never married, he was popular with children and he loved the Christmas season. In readiness, Jonathan determined his death arrangements and a private family funeral is to be held in Scarborough on Friday 11 January. However, Jonathan has entrusted me with a memorial service and the burial of his ashes which will take place later in 2019 at Mavesyn Ridware in Staffordshire where Jonathan’s family home is close by the parish church.
Jonathan was proud of his Scottish Episcopalian ordination and will be well remembered by many former colleagues and friends in Scotland. Jonathan and I were priest friends for over forty years and it has been my sad privilege in recent months to accompany him along his final journey. May he rest in peace and rise in glory.