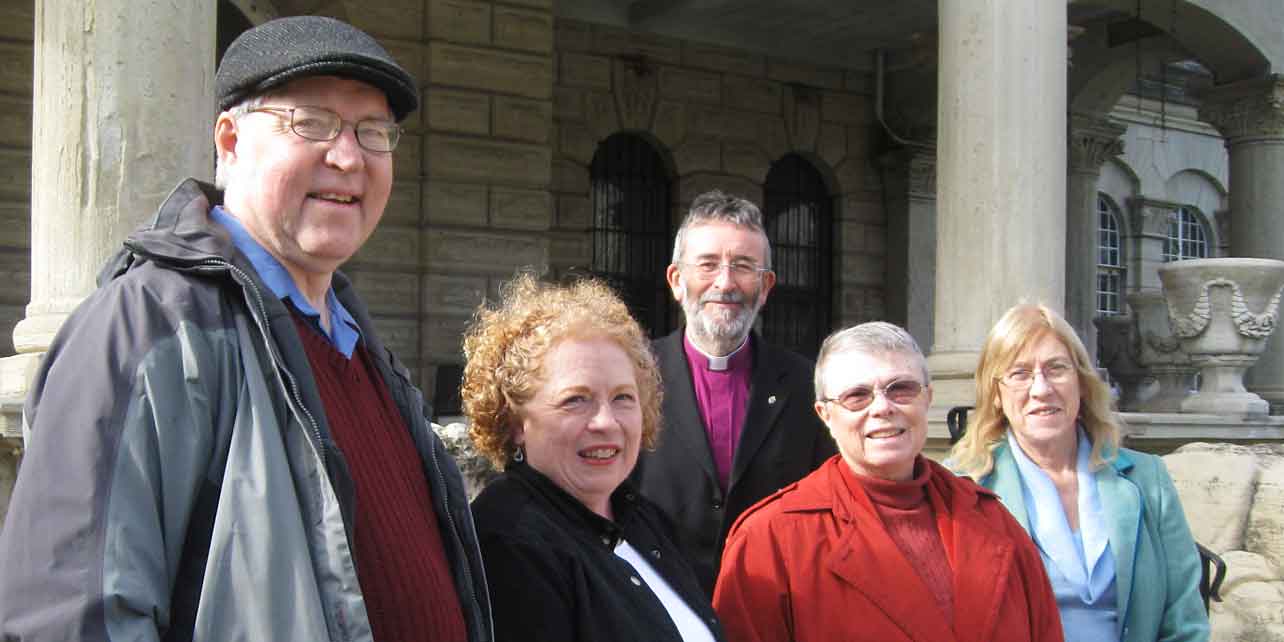 Bishop Nigel with members of our companion Diocese of Iowa


‘Bishop goes to jail’ makes a great headline but that’s precisely what Anne and I did in late October at Anamosa State Penitentiary in Iowa, USA. We sat in on an impressive Education for Ministry class for prisoners, including lifers and murderers, many of whom will never be released. Ably led by the Reverends Anne Williams and Melody Rockwell, Prison Chaplains, it has been running for nine years, impacted forty men and graduated eleven. It is the first group anywhere to have an inmate mentor. We were deeply moved by the experience and left with much to ponder.  Next summer the Reverends Mel and Barbara Schlachter (in the photo) are leading an Iowa Diocesan Celtic Pilgrimage to the UK & Ireland which will include time in Brechin Diocese, based at St Drostan’s Lodge, Tarfside from 19-22 July 2013. The pilgrims, some of whom Anne and I met, will want to visit and worship across the diocese and I have promised them that Pat Millar and I will be arranging a suitable programme.


Visiting a Companion Diocese is demanding. We travelled widely and there were many highlights during our time in Iowa, not least a visit to Sioux City where we visited a new drop-in centre for the homeless and where Anne and I were embraced by the Native Indian Episcopal Church congregation with a ‘Star Quilt’ – a rare privilege which meant much to us. Bishop Meshack, now retired from Swaziland, is spending a year as their Interim Rector. The opportunity to engage with residents of the local Indian Reservations on the Nebraska border was eye-opening.  During the Diocesan Convention I presided over a Scottish Liturgy Eucharist and preached at Evensong in St Paul’s Cathedral, Des Moines where delightfully I was made an Honorary Canon. I led a Clergy Study Day on contemporary priesthood which one of the clergy later described as ‘unusually good’! Convention has generously given the Food Programme at St Salvador’s in Dundee $3000 from their Alleluia Fund for immediate impact Church and society projects.


Across the vast Mid-West prairie we visited Davenport, Iowa City and Cedar Rapids, I preached to major congregations on our two Sundays away, and made a PowerPoint presentation about Brechin Diocese to four churches whose members were much taken with the pictures and our challenges and stories. We visited the Amish Mennonite community at Kalona and enjoyed an epic Drake University American Football victory which was a parable in never giving up until the final time-out. While there I gained the impression that the thirty year-old Iowa – Brechin companionship has been ‘sleeping’ a bit. Some memories of people and places were old, while other folk didn’t really know much about the Scottish scene or us. I believe that our visit has re-awakened the relationship and whet appetites for more exchanges and friendships. It’s now up to us to come up with some ideas and reciprocate the warm American hospitality we received.

By the time you read this, Pat Millar, Anne and I will have just returned from the Consecration of the new Bishop of Swaziland, our other Companion Diocese. We will be visiting some of the projects Brechin supports. Looking ahead, Bishop Alan Scarfe in Iowa and I are hoping that Bishop Ellinah might meet us both here in Scotland, at a Diocesan Synod weekend in Dundee in October next year.  They say a companion is someone who shows another where bread may be found. In different cultural guises in Brechin, Iowa and Swaziland we each face similar challenges to grow the faith, reach out into local communities, engage with public issues, and to gather and deploy our resources effectively. All three dioceses are able to both give and receive, prayerfully and materially.  In this season of Advent across the Anglican Communion we await patiently the opportunity to receive the Good News of God’s ultimate companion relationship in the Christ-child.