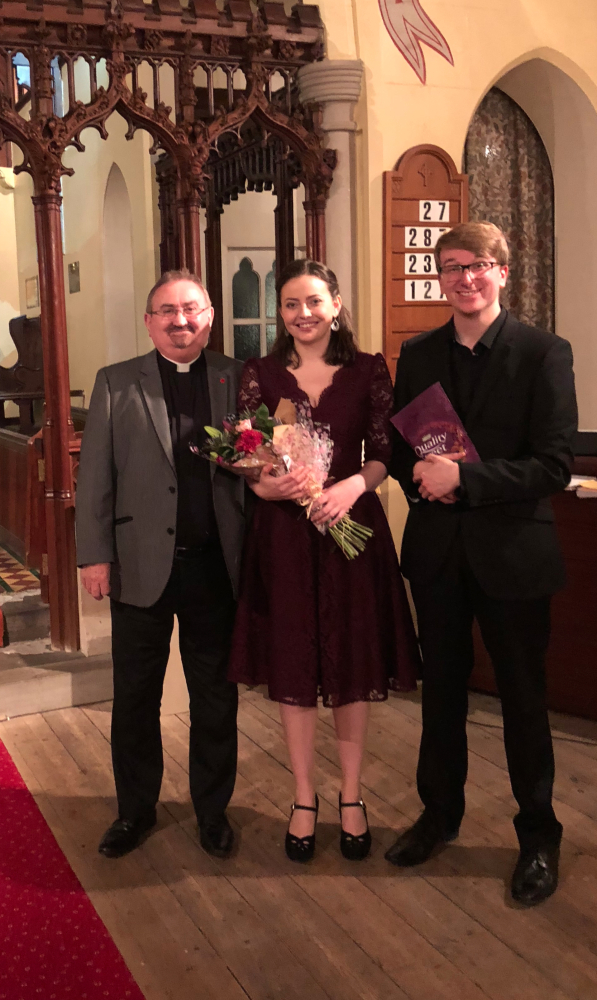 Canon Ian Young pulled his considerable array of strings to bring together pianist Daniel Silcock and soprano Myrna Tennant to perform at All Saints'. Both are recent first-class honours graduates from the Royal Conservatoire in Scotland.

Daniel performs internationally as a solo recitalist, accompanist, chamber musician, and concerto soloist. He was a participant in the BBC Young Musician of the Year, having made his concerto debut playing Mendelssohn's G Minor Concerto aged fifteen, under the baton of David Danzmayr. He is currently in his first year of a master's degree at RCS, studying under the tutelage of Aaron Shorr.

Myrna completed her studies at the RCS under the tutelage of Helen Lawson, and is presently studying with Wilma McDougall. She has been a member of several higly esteemed vocal ensembles, including RCS Voices and Genesis Sixteen 2017/18 programme with Harry Christophers and Eamonn Douglas, with whom she performed at venues including Bridgewater Hall. Later this month, she will be performing the role of Cinderella in Massanet's adaptation of the fairytale.

During the course of the Auld Alliance concert, Daniel and Myrna performed works by Claude Debussy, Benjamin Britten, Gabriel Faure, Reynaldo Hahn and Maurice Lavel, as well as Scottish composers Buxton Orr and Thea Musgrave. Myrna also sang two Robert Burns songs, Ca' the Yowes and, as a much called-for encore,  My Love is like a Red, Red, Rose.

The concert was attended by many from the Carse of Gowrie and the wider community, while the Diocese of Brechin was represented by the Diocesan Dean, The Very Rev. Dr. Francis Bridger and his wife, Rev. Helen Bridger. Robin Pilcher proposed a heartfelt vote of thanks at the end of the concert and Lay Representative Dorothy Maingot made a presentation to both musicians. Refreshments and much discussion was then enjoyed by all.